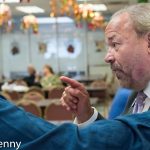 Bingo was over and the seniors heading home when mayoral candidate Bo Dietl arrived at Staten Island’s Arrochar Friendship Club, but he still had a winning visit.  Dietl arrived well past his scheduled 1:00 visit Wednesday.  That would have come mid-bingo, when the room was full, but a delayed Dietl appeared after most of the players had left.  He swirled through the remaining 25 or so, catching some for a handshake as they boarded a bus or made their way toward their car and chatting with a few lingering inside.

Dietl was warmly greeted, recognized by most.  Many offered support and promises to vote for him.  Little mention was made of rival candidate Nicole Malliotakis, who represents the neighborhood in the state assembly.  In conversations with a few attendees they spoke nicely about Malliotakis, but didn’t express an intention to vote for her over Dietl in November.