Republican/Conservative mayoral candidate Nicole Malliotakis held a press conference today to condemn what she characterized as a wrongful decrease by the de Blasio administration in spending on senior centers.  Speaking outside St. Benedict’s Roman Catholic Church in Throggs Neck Malliotakis pledged to increase such spending as mayor and to create to a Commission on Aging, composed of the heads of multiple City agencies, to “create a blue print to prepare NYC to serve and retain our aging population.”

Press question topics included details of her increased spending, how she would fund such increased payments, her campaign’s expected receipt of $1.6 million in matching funds, Puerto Rico’s medium and long term rebuilding and the Bronx school stabbing.

There’s some irony in the great boost Malliotakis’ campaign received  from the award of matching funds, however.  Malliotakis has voiced opposition to the City’s program, calling it an irresponsible use of taxpayer money, and voted against a bill that would have established a state matching program with a similar 6-1 match.  Malliotakis termed that proposal “a completely disgraceful use of taxpayer money.” END_OF_DOCUMENT_TOKEN_TO_BE_REPLACED 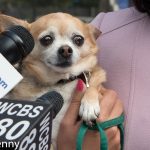 Money has been one of many steep challenges for Republican/Conservative mayoral candidate Nicole Malliotakis, but she appears to be making progress on addressing that challenge.  She hit a campaign highlight Friday, announcing that she expects to qualify tomorrow for $1.6 million in City campaign finance matching funds.  Receiving such an amount would markedly boost her campaign’s financial condition and put her reasonable close financially to Mayor de Blasio’s campaign, which reported $2.3 million on hand as of September 18th.  Malliotakis reported having less than 1/10th of that amount, $163,000, on hand as of the 18th, but receipt of her estimated $1.6 million in matching funds would markedly improved her campaign’s financial condition.  (The Campaign Finance Board will determine whether she qualifies, as well as determine the precise amount.)  END_OF_DOCUMENT_TOKEN_TO_BE_REPLACED

END_OF_DOCUMENT_TOKEN_TO_BE_REPLACED


Republican/Conservative mayoral candidate Nicole Malliotakis held a press conference Wednesday at Elmhurst’s Pan Am Hotel, joining the group Elmhurst United in protest of the de Blasio administration’s plan to convert the hotel into a longterm residence for homeless families. 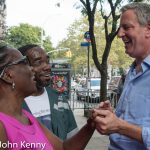 
Republican/Conservative mayoral candidate Nicole Malliotakis expressed some confidence today that she’ll qualify for campaign matching funds, but she was far from declaring her effort complete.  Saying “I feel confident about it” and that “I believe that we will” qualify for matching funds, Malliotakis added, however, that her campaign’s accountant is still reviewing contribution records.

New York City’s campaign finance laws provide a 6-1 match to candidates for contributions of between$10-$175 from City residents, but mayoral candidates must meet the thresholds of receiving at least $250,000 in eligible contributions from at least 1,000 City resident contributors.  Malliotakis has previously reported that she’s met the 1,000 contributor threshold, but not the $250,000 in eligible contributions threshold.  She recently said that she was about $20,000 shy of that threshold, as she focused on fundraising ahead of the most recent reporting cutoff on September 22nd.

Receiving matching funds is a big item for Malliotakis.  Raising money has been difficult, with cash on hand as of August 28th of $212,000.  (Bill de Blasio reported $5.1 million as of that date.)  Receiving matching funds would produce hundreds of thousands of dollars, possibly close to $1 million for Malliotakis, and meaningfully improve her campaign’s ability to operate.  Will she make it?  Stay tuned.


Republican/Conservative mayoral candidate Nicole Malliotakis has no opinion on Graham-Cassidy, the immensely consequential healthcare bill currently being pushed toward a vote by Republicans in the U.S. Senate.  Among the many likely effects of the bill is a reduction in Medicaid funding to New York State in the tens of billions of dollars over the next ten years.

This afternoon Malliotakis said “I have not read the language” when I asked if she supports it.  That’s a familiar response from Malliotakis, who has similarly refused to offer a position on previous Republican efforts at dramatically changing Obamacare in July, June and May.       We spoke during a press conference in Elmhurst outside the Pan Am Hotel.


Nicole is a no.  Republican/Conservative mayoral candidate Nicole Malliotakis opposes holding a New York State constitutional convention and urges a “no” vote.

Malliotakis’ expressed view matches that of much of organized labor, opposing a convention on fears that it could result in weakening or eliminating the existing state constitution’s prohibition on reducing public employee pensions.  It also matches that of rival candidates Bo Dietl and Bill de Blasio and the two parties who have Malliotakis as their nominee, the Republican and Conservative parties.  We spoke this afternoon just before Harlem’s African American Day Parade.

Update – Note:  In May Malliotakis said that she was “very torn” on whether to support a ConCon and had not yet made a decision. 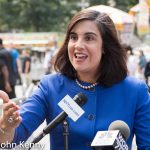