Mayoral candidate Bo Dietl, running on a self-created ballot line, called on Republican/Conservative mayoral nominee Nicole Malliotakis to withdraw from the race.  Dietl issued a press release and spoke at a candidate forum last night urging his rival to end her candidacy.  We spoke at length with Dietl after the forum; video excerpts of our conversation are below.


Mayoral candidate Bo Dietl said he would like to punch Mayor Bill de Blasio, although he later tried to minimize the literalness of his comment.  A candidate forum hosted by the Queens Tribune and St. John’s University Tuesday night included a “lightning round” question asking which council member or citywide elected official each candidate would most and least like to be stuck in an elevator with.  Dietl named de Blasio as the official he would most like to be stuck in an elevator with “so I could punch him.”  When asked afterwards (by the Post‘s Rich Calder) about his comment Dietl offered that “you can’t talk violence,” but proceeded to describe his disdain for de Blasio.


Republican mayoral candidate Nicole Malliotakis was critical of Mayor Bill de Blasio’s intention to create a commission to consider removing statues and other public art honoring Confederate soldiers and other public figures whose actions are regarded as dishonorable.  Responding to a series of questions from Erin Durkin of the Daily News and Yoav Gonen of the Post, Malliotakis asserted that de Blasio’s announced intention has “caused tremendous division in our City” and that he’s acted solely to seek publicity.  She later said, however, that de Blasio should not have announced his intended review, but instead should have had “individuals quietly go around the City” to look at and consider public art for removal.

Malliotakis also criticized de Blasio’s stated 90 day goal for the review, noting that the timeframe places completion after November’s election.  She demanded that any such review be completed and announced before the election.  Asked for her view on several specific statues Malliotakis said that she believes the statue of Christopher Columbus (who she errantly referred to as “the founder of our nation”) in Columbus Circle should stay.


She’ll be watching.  Republican mayoral candidate Nicole Malliotakis was an emphatic “yes” when I asked whether she plans to watch the Democratic mayoral debate tonight between Mayor Bill de Blasio and Sal Albanese.  Urging “everyone in the City to watch,” Malliotakis cast the debate as the “beginning of holding Mayor Bill de Blasio accountable” with the public able to see “what’s happening in this City.”

Republican mayoral candidate Nicole Malliotakis professed to be unconcerned about rival candidate Bo Dietl, trying to instead focus on Bill de Blasio in a brief discussion today.  Malliotakis is the only Republican who qualified for the primary and will therefor be the Republican nominee, de Blasio is widely expected to easily win the Democratic primary and Dietl has filed petitions seeking to be on a self-created line in the general election.

Dietl issued a press release this morning, dubbing himself “Feisty Bo Dietl,” touting his and Malliotakis’ scheduled appearance at a candidate forum Tuesday evening.  I spoke with Malliotakis shortly afterwards, during a visit to Stuyvesant Gardens II, a NYCHA development in Bed-Stuy. END_OF_DOCUMENT_TOKEN_TO_BE_REPLACED

Republican mayoral candidate Nicole Malliotakis is on a nine stop NYCHA tour today, visiting public housing in Brooklyn, Manhattan and the Bronx.  Billed as a “listening tour”, Malliotakis’ visits included  meeting with tenant leaders as she was guided by activist Tony Herbert.  I joined her visit to Stuyvesant Gardens II in Bed-Stuy. END_OF_DOCUMENT_TOKEN_TO_BE_REPLACED


Republican mayoral candidate Nicole Malliotakis today offered a more direct criticism of President Trump’s reaction to the Charlottesville rally and his Tuesday press conference, saying that she’s “very disappointed in how the president handled the situation.”  Malliotakis also said that the president should have directly attributed the violence in Charlottesville to white supremacists.  Malliotakis previously spoke about Charlottesville in a brief interview with me Sunday and at a press conference Monday.  Her comments received significant criticism, with Mayor de Blasio’s campaign attacking her over her Sunday comments.

Malliotakis quickly pivoted to criticizing Mayor de Blasio for his attacks on her on Charlottesville and for trying “to paint me as … ultra-right wing.”  She described herself as “very offended” at the mayor’s attacks and especially at his use of those attacks to fundraise.  Malliotakis sidestepped a question of whether she’s concerned about the effect of Trump’s words on Republican candidates here in New York City, saying that “every individual should be judged on what they say, what they propose, and not by anybody else in their party” and analogized having a mayor and governor who “don’t see eye to eye” to her differences with President Trump.  Malliotakis then returned to criticizing Mayor de Blasio’s performance in office, saying that he should defend his record rather than attempt to “tie me to the one guy who has an 18% approval rating in the City of New York.” 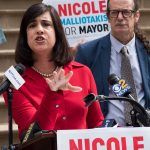